What's Next for Stay Healthy Streets?

In the last year, we’ve seen a huge increase in the number of people outside—walking, skateboarding, biking, and rolling down the streets—and engaging with their neighborhoods in a big way. What’s next for the City’s temporary street programs?

Click to watch this video about the Stay Healthy Streets Program in 2020:

In the spring of 2020, Seattle Neighborhood Greenways pushed the idea of Open Streets as one of our 8 Solutions for Safe Social Distancing during the COVID-19 pandemic. These streets are closed to vehicle through-traffic, and OPEN to people walking, rolling, and biking in the street (local access, deliveries, and emergency services are still allowed).

Thanks to the outspoken support of neighborhood advocates like you, the City introduced Stay Healthy Streets a few miles at a time until we had over 25 miles in 13 locations around the city, as well as two sister programs: Keep Moving Streets (recreation space near parks) and Stay Healthy Blocks (neighbor-run DIY Stay Healthy Streets). And they have been a HUGE hit! Communities have rallied around their local open streets, and are eager to make them permanent. For instance, SDOT surveyed people near the 1st Ave Stay Healthy Street in Greenwood and found that over 80% supported making it permanent, which is incredible given that any changes to streets tend to be controversial.

So what’s next for these beloved streets?

Thanks to popular demand last summer, Mayor Durkan committed to making 20 miles of the pilot Stay Healthy Streets program permanent, starting with streets in Greenwood (1st Ave NW) and Lake City. Now, the City is thinking through how to fulfill this promise to fund and construct permanent improvements.

Most of the Stay Healthy Streets created so far have been on existing Neighborhood Greenways. All of these Neighborhood Greenways already went through a public engagement process and were prioritized for people walking and biking, and de-prioritized for people driving—with the use of stop signs, speed humps, and signs. Stay Healthy Streets, for the most part, just clarified and reinforced the original intent of neighborhood greenways, by placing signs that say “Street Closed” to indicate they are for local access only for cars, and that people are allowed to walk in the street.

Should Stay Healthy Streets be made permanent? YES.

Stay Healthy Streets should include community placemaking and clear signage for people walking and biking on the street, and people looking for the street, and both signage and physical barriers for drivers trying to avoid the street—with simple, clear branding that’s easy to understand and makes sense with other Seattle programs and infrastructure.

In addition to the community engagement process SDOT has already launched, we believe partnerships with the Department of Neighborhoods and community organizations to host festival streets, farmers markets, neighborhood block parties, and other gatherings will turn these street spaces into the community places we’ve all envisioned. 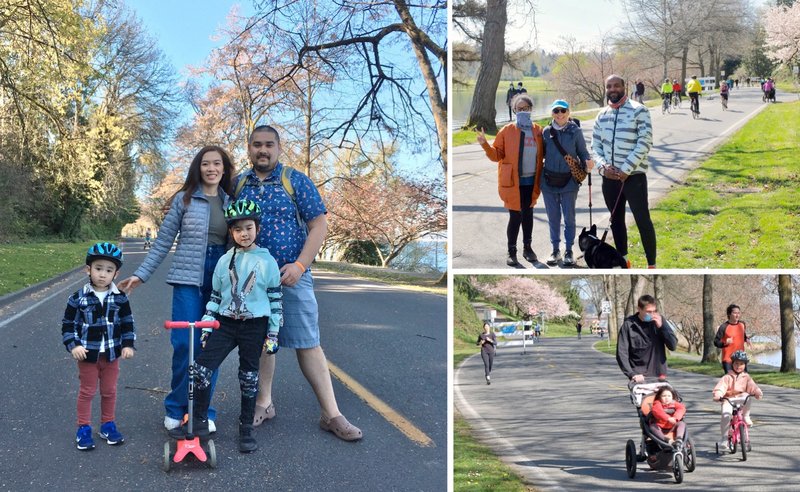 Sometimes, Neighborhood Greenways and Stay Healthy Streets haven’t reached their true potential because too much car traffic remains on the street. In those cases, the City should improve the street through diverters and other traffic-calming measures. But in other cases, the underlying Neighborhood Greenways, and hence the additional Stay Healthy Streets, aren’t successful due to the route being too inconvenient, hard to follow, or hilly compared to other alternatives, which results in comparatively fewer people using the routes. In these cases, we need to ask people what they want and find alternative ways to meet community needs.

We can act quickly to put it in as a pilot, get feedback, then move to full implementation if it’s well-liked. Do people need better routes for transportation? Protected bike routes, sidewalks, and bus lanes can do that. More space for recreation? The Keep Moving Streets program increases public park space. Spaces for community gathering? Cafe Streets, pedestrian streets, and play streets. Improved traffic calming? Fund the Home Zone program adequately to allow neighbors to create systemic traffic calming for a whole neighborhood.

Should this program expand? YES!

These streets should be everywhere. We originally envisioned 130 miles of Stay Healthy Streets that could be rapidly implemented during the pandemic, but the potential is even greater. They should be in every neighborhood and accessible to everyone, as much a part of every neighborhood’s fabric as the local community center, plaza, or park space. These streets can connect people to transit stations, schools, parks, grocery stores, and jobs. And the streets can also be destinations themselves—places to play, meet your neighbors, and build community. 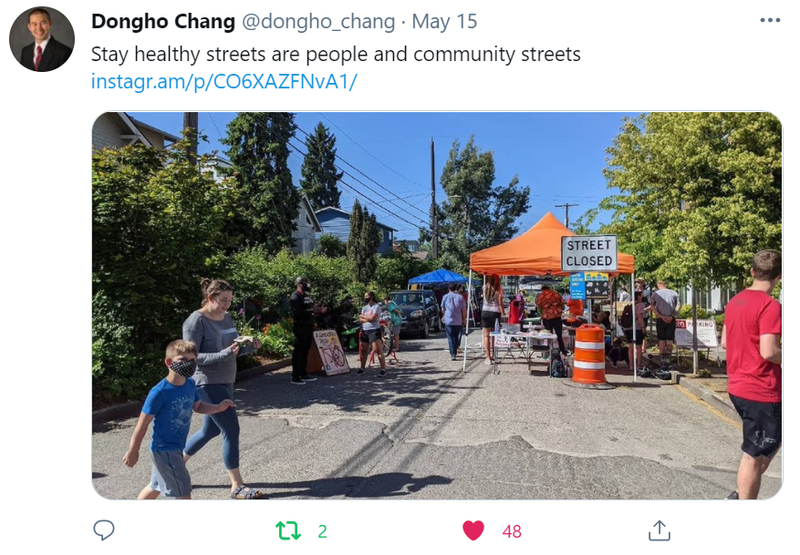 Last year, instead of rapidly expanding the Stay Healthy Street program to more streets like Oakland and other cities, SDOT decided to go with a DIY Stay Healthy Blocks approach that  allowed neighbors to build their own mini Stay Healthy Streets. It was incredibly exciting in theory, but was hindered by overwhelming permit restrictions that made it inequitable and overly burdensome. Instead of working to improve the program, the City rolled it into SDOT’s existing Play Street program. As a result, Stay Healthy Blocks can continue only as single-day permits, likely focused around holidays and festivals. We would like to see a path forward for neighbor-initiated open streets of some kind, and are eager to work with SDOT to expand this program in a way that could be open to all. 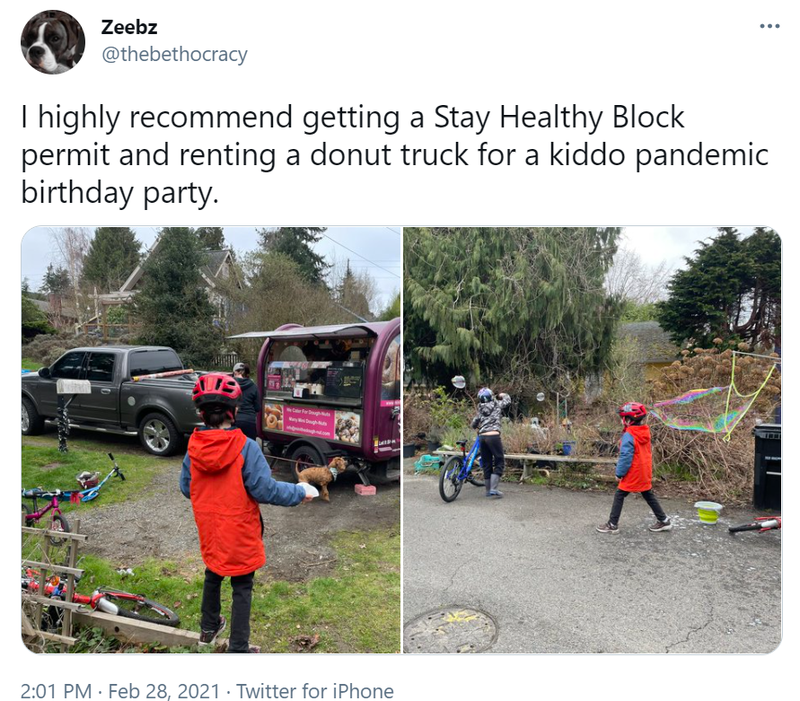 Keep Moving Streets are collaborations between SDOT and the Seattle Parks Department that create more public park space for recreation and play.

Thanks to continual neighborhood advocacy, SDOT announced last week that the Alki Point Keep Moving Street is officially extended for at least a year, through spring 2022! In the meantime, SDOT is seeking funding for permanent infrastructure and conducting public outreach.

SDOT has announced that the Green Lake Keep Moving Street will continue, and local advocates are working to extend it around the west side of Green Lake on Aurora. Sign the petition here.

SDOT just announced that they will re-open the Lake Washington Boulevard Keep Moving Street this summer, and we are thrilled! Lake Washington Blvd has been periodically opened to people walking, biking, rolling, running, and skating during the pandemic—and it has been a HUGE hit. Our local group, Rainier Valley Greenways–Safe Streets, is leading the way to solicit community feedback and rally support, and to encourage the city to conduct responsive and equitable community engagement. Click here to see the latest and sign the petition to reopen the full three miles of Lake Washington Boulevard to people again this year.

Thank you to everyone who advocated for, and got outside to enjoy, these amazing street spaces in the last year! Let’s keep a good thing going!